This year the Association held its 26th Reunion at the Mercure Hotel, Norwich over the weekend 12th-15th October with 75 members and guests attending including President Steve Love QPM, CCMDP, MA, FsyI; Force ROA Liaison Officer, Insp Angela Harney and Eamon Keating, DPF National Chairman. Special thanks were recorded to the Force and DPF for their assistance kindly afforded to ROA during the year. Unfortunately our Patron Jack Aspinall QPM was unable to attend but sent his best wishes for a successful reunion.

The AGM was well attended and the usual format adopted with members receiving reports on the work of the association undertaken throughout the course of the year as well as being given a full account of ROA’s financial position as at 31st March 2012. Treasurer Les Cracknell announced that if re-elected he would continue to serve for one more year afterwhich he would step down. Chairman Peter Parkes on behalf of ROA thanked Les for his commitment over many years in keeping the finances in good shape.

The Secretary gave an update on some of the matters that he had dealt with during the year and a copy of what he said is reproduced below:

Another reunion – different venue – and thankfully I can report that the organisation continues to thrive – membership is increasing and it is good to welcome several new members attending for the first time – if this trend continues we may soon have more members than the Force!

Working together as a team since last Conference ‘Your Committee’ has continued to work on your behalf-representing member’s interests.

I have to admit that the last 12months from a secretarial point of view have been fairly quiet. That said, the ROA continued its affiliation to the CSPA and PSPC and for that we receive regular updates on the campaigning issues and other matters relevant to pensions which are posted on the ROA website including the tax and benefit changes announced by the chancellor, the uprating of social security benefits that announced that the basic state pension and public service pension would increase by 5.2% from 9th April; and details of the outcome of the judicial review challenging the government’s decision to switch indexation of public service pensions from RPI to CPI. It’s important to note that PFEW, NARPO and several of the big unions GMB and Prospect funded the judicial review. As widely reported despite a well constructed and presented legal case being made to the Court of Appeal the Judges were not convinced of the merits of the claim – that the substitution of the RPI with CPI should not have been allowed under the existing statutory provision.

A disappointing outcome and it was felt that the prospect of securing a different judgement from the Supreme Court would be extremely remote. That said the political campaign for a return to RPI indexation at some future date would continue.

Can I also mention briefly that the Office of National Statistics is carrying out a review of both the RPI and CPI indices. The CPI review will consider amongst other things how best to include ‘Owner Occupier’ housing costs and the extent to which consumers trade down to cheaper products when prices rise. As I understand, the likely outcome of the reviews will lead to a higher CPI and slightly lower RPI but the difficulty will be trying to persuade Government – in these austere times – to use the revised indices for indexation of pensions and benefits.

Now what will next years pension increase be – we know that this year saw a good increase – 5.2% – The September figure – on which normally the following years increase is based – will be announced shortly. But for information the CPI index for August stood at 2.5% down from 2.6% in July. Interestingly the RPI figure was 2.9%. So with inflation falling – allegedly – next year’s increase is likely to be much lower perhaps between 2 and 2.5%. Watch this space!

Just one other item I will mention, we have entered into an agreement with the holiday company Hoseasons having secured a deal that gives roa members 10% discount. The first offer relates to Holidays Cottages – Cottages4You – and the details have been put on the web. We can thank Dave Rodgers for making the arrangements and following my report he will explain in more detail and answer any questions you may have.

News and information will continue to be posted on the web as and when and with the newsletter which is distributed with ‘Talk Through’.

Some of you will recall Arthur Bedwell a founder member and past Chairman of ROA. Arthur aged 97 years was now being cared for in a nursing home and his wife Helen sadly is registered blind and disabled but with help and support from family they continue strong and wish to be remembered to roa members.

That concludes my report. Thank you.

Vice Chair Dave Rogers outlined the agreement with the holiday company Hoseasons giving members a 10% discount with Cottages4You and Boating holidays on the Norfolk Broads, details which will be published on the roa website. Dave also gave details of various activities and events that were available to members through the Civil Service Sports Club.

Chairman Peter Parkes announced that Jon Livitt and Ken Taylor would not be seeking re-election, which meant that there were two vacancies for the Committee. The Chairman, Vice Chair, Secretary and Treasurer were re-elected unopposed and Bill Duncan elected to the position of Assistant Secretary. When it came to the election of the four Committee members five nominations were received necessitating a vote. The nominations were Sue Parkes, Les Gosling, Lionel Roslyn, Chris McComb and John Barber. Following a show of hands Sue, Les, Lionel and Chris were duly elected to serve. Newly elected members expressed thanks for the support given. A revised list is shown below.

Following the AGM DPF National Chairman Eamon Keating and Force Liaison Officer Angela Harney gave an summary of the many activities that MDP had been involved with during the year including in support of the Olympic Games and the UK Border Agency. The planned cuts in force numbers continued to be of concern and consultations were to begin shortly with MoD over individual complement reviews. In addition the CID was going to be badly affected with a sizeable cut in staff numbers that will reduce the MDP’s ability to undertake criminal investigation on the MoD estate. Angela Harney commented on some of the ROA issues she had dealt with during the year and said how pleasing it was to welcome new members to the association. She also passed on good wishes from her husband Ron who was unable to attend this year’s reunion.

At the Dinner on Sunday evening ROA President Steve Love gave an after dinner speech that included an overview of key events that had occurred during the previous year. It was evident from his remarks that the Force is beginning to emerge from a difficult period as a result of financial constraints on the force budget. Mr Love also announced that he would be retiring from the force in April 2013 and that he planned on joining the association upon his retirement. All going well he would attend as a member at the 2013 reunion.

Although numbers were down slightly on previous years those who did attend thoroughly enjoyed the weekend event and as always it was good to welcome several new members joining us for the first time.

Next years AGM/Reunion will be held at the Barcello Imperial Hotel, Torquay from Friday 11th to Monday 14th October 2013. The inclusive cost is £196 per person. The Booking Form will be circulated shortly. It is worth highlighting the value of taking out insurance when booking (£9 per person) as in the event of having to cancel at short notice a full refund is given. 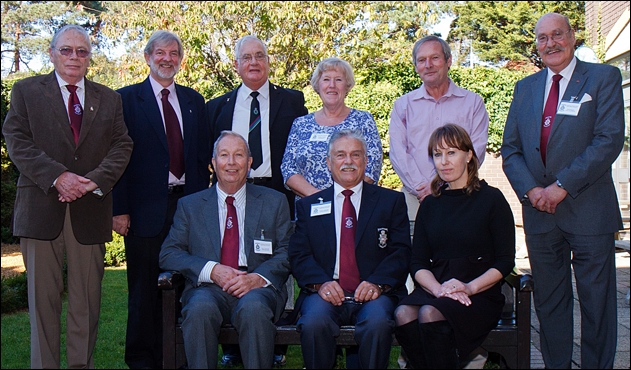 It should be noted that apart from the Newsletter that is normally circulated with ‘Talk Through’ the website is updated from time to time with additional news and information. See www.dpf.org.uk/roa for details.

Financial support from The Charity for Civil Servants

Life throws up many challenges, and frequently they go hand in hand with money worries. Particularly at this current time, financial worries can be intertwined with fears around the pandemic.

The Charity can help with all sorts of financial issues, whether your income has suddenly reduced from job loss or ill health, or whether you’re unable to pay for essential items that need replacing. You may have taken the steps to leave a relationship and need to move on, or you may have lost someone and find it hard to cope financially, as well as struggling with bereavement.

They can’t promise to pay for everything you need, but they’ll work with you to understand what they can help with, and look at your individual needs in confidence and without judgement.

For further information about the many ways the Charity can help, take a look at their website or call to speak to an Adviser in confidence on Freephone 0800 056 2424

The ROA has made available to members a 'My Document Locator' which is produced in the form of a booklet that can be used as a check list of personal documents that records where key personal records, assets and papers can be located in the event of death or incapacity. It is not a Will but simply a check list. The booklet can be downloaded by clicking here.