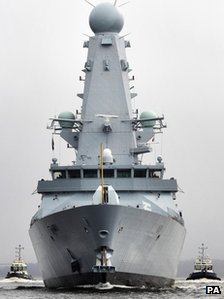 HMS Duncan's transition into front-line service is being marked by a commissioning ceremony at Portsmouth Naval Base at about 10:55 BST.

It joins HMS Daring, HMS Dauntless, HMS Diamond, HMS Dragon and HMS Defender in active service, which were described by the Royal Navy as the “most advanced warships the nation has ever built”.

He added: “The commissioning ceremony marks a major milestone in the life of HMS Duncan.

“We are delighted that it can be shared with so many distinguished guests, friends, family, affiliates, and former Duncanites.”

More than 200 people are attending the hour-long ceremony, including veterans from the last HMS Duncan, a Type 14 frigate which was in service between 1957 and 1985.

A Royal Navy spokesman said: “The ship's company… enjoy creature comforts only dreamed of by their forebears.

“No sailor lives in a mess square for more than six people and there are no communal toilets or showers.”

The ship is in the middle of a period of trials and training around the UK which will last into 2014.

The first Type 45, HMS Daring, arrived in Portsmouth in January 2009.

When operational the Daring class destroyers are equipped with Sea Viper anti-air missiles.

They are able to carry 60 troops and have a flight deck which can accommodate a helicopter the size of a Chinook.