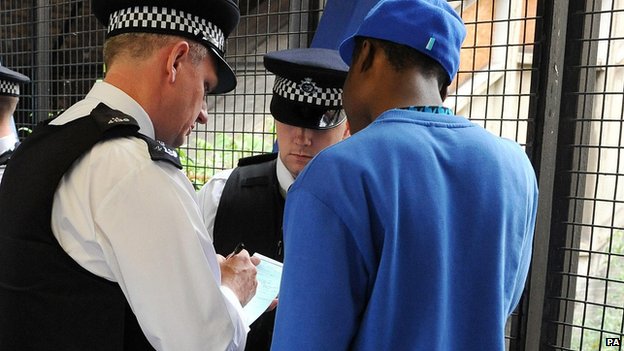 All 43 police forces in England and Wales have agreed to adopt a new government code of conduct on the use of their powers to stop and search members of the public.

Home Secretary Theresa May had said the technique was being misused so often that it was damaging relations between the public and police.

Police will now record every outcome resulting from stop and search. There will also be more limits on using the controversial “Section 60” stops.

Officers will need higher authorisation than at present to deploy Section 60 powers, under which someone may be stopped without grounds for suspicion in a situation where serious violence is anticipated.

Next year, police will start mapping where the practice is used so people can see if one area is targeted more than others, and the public will be entitled to know why this is the case.

The changes are being brought in after Her Majesty's Inspectorate of Constabulary found that 27% of stop and searches did not satisfy the requirement that there be “reasonable grounds for suspicion”, meaning more than 250,000 of the one million searches conducted last year could have been illegal.

The adoption of the Best Use of Stop and Search code comes as the Metropolitan Police said it used Section 60 powers after violent incidents at the Notting Hill Carnival in London on Monday.

Ken Hinds, a member of the London borough of Haringey's stop and search monitoring group, does not believe the new code will be enough to change attitudes in some areas.

Mr Hinds says none of the 125 stop and searches he has been subjected to in the last 30 years has resulted in police finding he has done anything illegal.

He told BBC Radio 4's Today programme: “After 40 years of abuse of stop and search, we now refer to it as stop and scarred in our community. It has alienated whole swathes.”

Last year, an Equality and Human Rights Commission report said black and Asian people were still far more likely than white people to be stopped and searched by police.

Black people were six times as likely to be stopped overall – but this was as high as 29 times in some areas.

A black police inspector, Nick Glynn of the Leicestershire force, has already been chosen to lead reform of the way stop-and-search powers are used nationally.

He said he had been stopped and searched himself about 30 times while off duty by officers from other forces.

He added: “The Met has made significant improvements to stop and search over the last two years to not only reduce the total number of people we search, but also to ensure that our officers focus on those areas and types of crime that the public are most concerned about.

“Our work with communities and monitoring groups is helping to ensure we are more transparent than ever in how stop and search helps to reduce crime and keep people safe.”

Chief Constable Alex Marshall, who heads the College of Policing, told Today that stop and search was an important power to protect communities and the changes were intended to address its “difficult history”.

He said people would support its use if searches well targeted and carried out with respect.

Section 60AA gives police powers to order the removal of disguises in places where Section 60 is in use.

The Met said the measures were taken “in response to incidents of violence, and intelligence received, which have taken place within a short period of time”.

Three men were stabbed and two police officers were injured in a series of violent clashes at the carnival on Monday evening.

Best Use of Stop and Search code