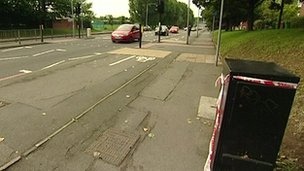 A Metropolitan Police traffic officer who was hurt in a hit-and-run incident in south London has died.

PC Andrew Duncan, 47, was on foot when he tried to stop a car in Sutton at 00:50 BST on Friday but the vehicle struck him.

The father-of-two died in hospital in the early hours, the Met said.

Police said a woman was arrested late on Saturday on suspicion of perverting the course of justice. She remains in custody at a south London police station.

The incident, which involved a Volkswagen Golf, happened on Reigate Avenue with the junction of Rose Hill.

The vehicle was later found abandoned nearby.

PC Duncan and a police colleague were carrying out speed checks in the area at the time.

“Andy was a hard working and courageous policeman. He served the community as both a police officer and as a scouting volunteer.

“The night he was injured, he was doing a job that he loved and we all had every right to expect he would return safely to his home and family – tragically that was not the case.”

PC Duncan was married and had a son and a daughter.

He joined the Met in 1990 and worked in Battersea, Hammersmith and Fulham, before joining the South-West Traffic Unit in 2004.

London Mayor Boris Johnson said: “His death is a tragedy and a reminder of the courage and sacrifice shown daily by the men and women who keep London safe.

“My thoughts and those of every Londoner are with Andrew's wife and children at this time.”

According to the Police Roll of Honour Trust website, the last Met officer to die as a result of crime while on duty was PC Gary Andrew Toms in April, 2009.

He was fatally injured attempting to arrest suspects in a vehicle in east London.

Before that, the previous Met officer to die as a result of crime was PC Kulwant Singh Sidhu, who fell through a glass skylight while pursuing suspects in October 1999.

A former Sussex Police officer has been fined £800 for illegally accessing the force's computers to get information about people he knew.

Brighton magistrates heard how Grant was a PC at Bognor Regis Police Station when he used the force's systems to find details of acquaintances.

He was arrested in March and suspended, then resigned before his court hearing.

Det Sgt Niall Moloney said: “The misuse of force computers or systems by either officers or staff for anything other than a policing purpose is totally unacceptable and is not tolerated by Sussex Police.

“Members of the public can be assured that their details are safe with us.

“Anyone who attempts to undermine that confidence will be dealt with swiftly and robustly.”

Grant was arrested after an investigation by officers from Sussex Police professional standards department looking at the misuse of the force's computer system.

As well as the fine, magistrates ordered he pay court costs of £100 at the hearing on Tuesday.

A police officer who has risen through the ranks from constable is the preferred candidate to become head of the force in Norfolk.

Mr Bailey's nomination will now be referred to the police and crime panel for confirmation on 25 October.

Mr Bett said the recruitment process had been completely open.

“Mr Bailey has proved himself to be highly competent in all his Association of Chief Police Officers roles to date.

“I am confident he is the right person to take the Norfolk Constabulary forward in these challenging times.

“He is an excellent leader and I will look to him to ensure that Norfolk remains an exemplary force driving through efficiencies and economies.

“I hope that the police and crime panel will endorse my choice”.

Mr Bailey has been a police officer for 27 years, serving predominantly as a detective.

In 1998, he was seconded to the National Crime Squad and as detective inspector he was responsible for managing covert operations targeting organised crime gangs.

In 2000, he worked on the investigation into the murder of human rights lawyer Rosemary Nelson, who was killed by a loyalist paramilitary group in Northern Ireland in 1999.

He worked for three years on the probe before he returned to Norfolk as a detective superintendent with responsibility for intelligence.

Mr Bailey was promoted to Deputy Chief Constable with responsibility for legal services, human resources, and force performance in September 2010.

He was promoted to temporary Chief Constable when Phil Gormley left to join National Crime Agency in June this year.