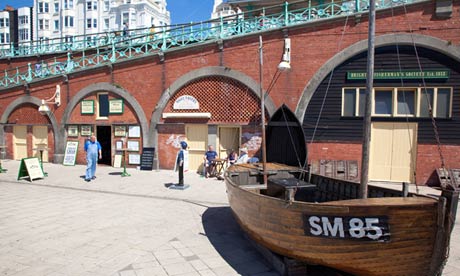 A police investigation into video footage that appeared to show an officer kicking a man moments after he was shot with a Taser gun has found no evidence of misconduct.

The film, which was taken by a member of the public, was drawn to the attention of Sussex police on 8 July following the incident on Brighton seafront three days earlier.

Officers were called to Sainsbury's in Western Road, Brighton, on 5 July after a complaint that a member of staff had been pushed to the ground by a man who was attempting to steal food from the store, a Sussex police spokesman said.

They traced the man to the seafront and they confirmed that at 6.33pm it had been necessary to Taser him in order to carry out a safe arrest, he said. The man received health and welfare checks to ensure that he was unharmed after the incident, he added.

The video, which was passed to the Argus newspaper in Brighton by a member of the public, appeared to show the man being kicked forcefully in the leg after he was shot with the Taser.

The Independent Police Complaints Commission viewed the initial circumstances of the incident, but did not feel that it met the requirement for a referral and passed it back to the professional standards department in Sussex to conduct the investigation.

The police spokesman said the evidence considered included a testimony from a member of the public who witnessed the incident, footage supplied by the media, an interview with the man who was Tasered, footage from the video cameras worn by the attending officers and a statement from a safety trainer.

Superintendent Steve Whitton said: “The officers in this case were making an arrest of a man who had allegedly committed a violent offence and was showing signs of aggression.

“The sweeping strike to the leg, a technique taught to all officers as a tactic to achieve control, was used in this case because the suspect had not fallen to the ground after the Taser had been deployed.

“The officer thought that the Taser had not been effective and that the suspect posed an immediate risk both to the officers and the wider public.

“I appreciate that the circumstances of this arrest, carried out in a very public place, may have looked extremely dramatic and very physical, especially when viewed on video.

“However, officers are carefully trained to use the minimum force necessary to resolve a situation as quickly as possible reducing the risk to the public, the person being arrested and the officers themselves.”