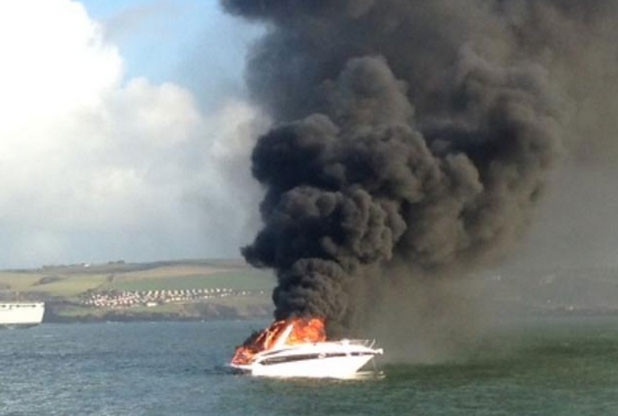 THREE sailors were rescued from the water in Plymouth Sound after they abandoned ship when their yacht caught fire yesterday afternoon.

The Ministry of Defence Police Marine Unit had two vessels come to the sailors' aid within two minutes of them being in the water.

The MDP RIB had been on patrol nearby and the launch was training in the vicinity.

The fire was in the engine of the 27foot coastliner motor yacht. It started at 2.45pm while the boat was south of Fort Picklecombe.

Once the crew members were recovered from the water uninjured they were taken to the Yacht Haven Quay at Cattewater.

The lifeboat and the Devon and Somerset Fire and Rescue boat were also in attendance.

A MDP Marine Unit spokesman said: “We had a vessel on patrol in the area and a launch carrying out training. The key point here is that all three crew were wearing lifejackets and we got them out of the water in two minutes.”

Dave Milford, RNLI Coxswain at Plymouth, said it was a good example of a successful multi-agency reaction.

He said: “It’s at times like this that the various emergency services work together to ensure lives are safe on the waters around Plymouth. Thanks to the efforts of all those involved the people from the boat are safe and the fire is out. We were helped by the benign conditions, thankfully there was only a light breeze and it was calm.”