Matt Baggott to step down as NI chief constable 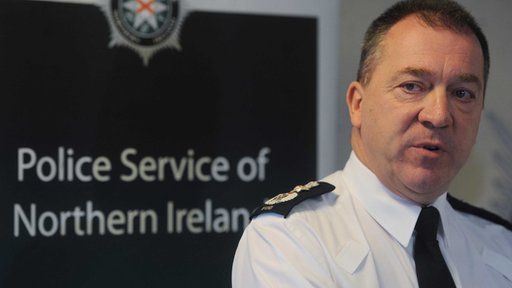 He took up the job as head of the Police Service of Northern Ireland in August 2009 and his contract ends in September 2014.

Mr Baggott, who has been a police officer for 37 years, could have sought a two-year extension.

He said it had been “a real privilege to lead the PSNI through the immense changes of the past few years”.

Mr Baggott added: “I am deeply proud of the courage and commitment of my colleagues and the enormous progress they have made on behalf of everyone.

“In my remaining months as chief my priorities will be to ensure the PSNI has the resources to deal effectively with the many challenges ahead and that our very personal, professional and protective service goes from strength to strength.”

He said Mr Baggott had “invested heavily” in increasing the public order policing capability with 600 extra officers on the streets.

Mr Baggott also forged ahead with streamlining the justice system.

During his time as chief constable, more than 600 people were charged for public order offences as a result of flag-related protests.

The appointment of a new chief constable is made by the Northern Ireland Policing Board and is subject to the approval of Justice Minister David Ford.

“The chief constable of the PSNI is undoubtedly one of the most demanding jobs in policing and, during his tenure, Matt has dealt with some of the most challenging issues in ensuring the safety and security of our community,” she said.

“A strong advocate for community policing, Matt has worked to make sure his officers and staff deliver the best possible service to the community and build on the considerable policing change programme here.”

“He carried out his duties with sincerity and warmth and whilst we did not always agree with some of the decisions he made, I and my colleagues always found him willing to listen and take our views on board,” he said.

SDLP Policing Board Member Dolores Kelly MLA commended Mr Baggott but said it would be “wrong to suggest that his tenure has not been without disappointment”.

“The slow, at times timid, response to the street protests which brought our towns and cities to a standstill in recent years dealt significant damage to community confidence in the police,” she said.

“At the time, he was the right person for the job – unfortunately times changed for the worse and we had police officers being killed, threatened and injured,” he said.

Pat Sheehan of Sinn Féin said: “We certainly had some disagreements with Matt over the past few years, but he came to the job with a background in community policing which is something we would have majored on heavily.”

The current deputy chief constable Judith Gillespie is also due to leave her post in March.