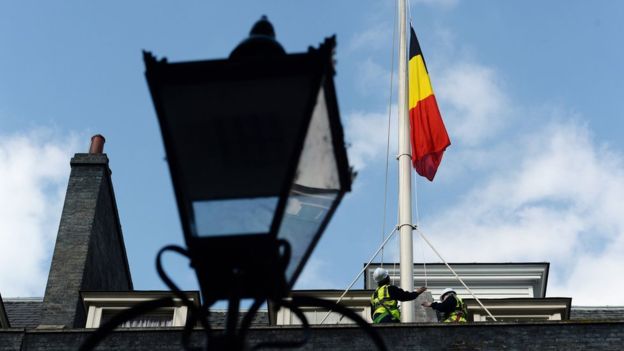 David Cameron has condemned terror attacks in Brussels as “appalling and savage” as the UK steps up security.

The blasts, which are feared to have killed at least 31 people, hit Brussels Airport and a metro station in the city shortly after 07:00 GMT.

One UK national has been injured in the airport attack, Downing Street said.

The Foreign Office is advising Britons in Brussels to avoid crowds, and has issued an emergency number for those worried a relative may have been affected – 020 7008 0000.

The UK's most senior counter-terrorism officer, Metropolitan Police Assistant Commissioner Mark Rowley, said increased police activity in the UK was a precaution, but not in response to any specific information or intelligence.

In London, he said, the Met was putting more police on duty to carry out patrols at key locations.

The Belgian flag is being flown at half mast above Downing Street.

Prime Minister David Cameron chaired an emergency Cobra meeting to determine the UK's response to the explosions, and said Britain would do everything it could to help the Belgian authorities.

“These are appalling and savage terrorist attacks and I've just spoken to the prime minister of Belgium to give our sympathies and our condolences to the Belgian people,” Mr Cameron said.

“They could just as well be attacks in Britain or in France or Germany, or elsewhere in Europe and we need to stand together against these appalling terrorists and make sure they can never win.”

He said the UK faced a “very real terror threat”, and the UK authorities were continuing to review information coming in – and would raise the terror threat level if there was information of a direct threat.

The UK terror threat level has been at “severe” since August 2014, meaning an attack is highly likely.

Confirming that one Briton was injured, a spokeswoman for the prime minister said: “We don't have confirmation of any other casualties – or, for the worst, fatalities – at this stage but details are still emerging, so that picture and that information could change.”

The attacks come four days after Salah Abdeslam, a key suspect in the Paris attacks, was captured in Brussels.

The Belgian federal prosecutor said it was “probably a suicide bomber” who struck the airport.

Police in the UK have appealed for any UK nationals who were in Brussels and may have images or footage of the incidents to come forward and assist the investigation.

They have set up a website where images and videos can be uploaded.

Meanwhile, Heathrow and Gatwick airports have stepped up security, while flights between the UK and Brussels are disrupted.

Brussels Airport issued a statement confirming all flights were cancelled, with passengers advised to contact their airlines.

The airport is expected to be closed for at least three days, BBC correspondent Gavin Lee said.

In the latest developments: