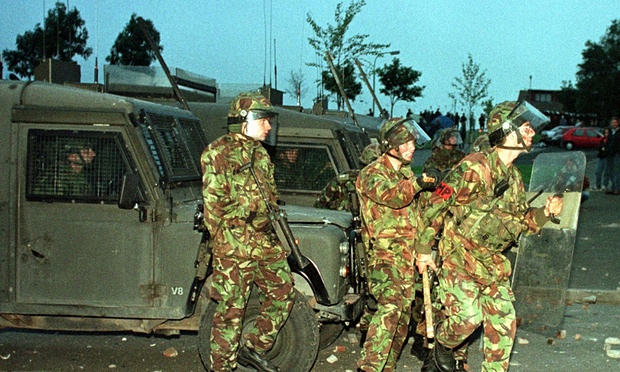 The British army is resistant to the idea of deploying thousands of troops on to UK streets in the event of a terrorist attack on home soil, despite the perceived increase in threat from groups such as Islamic State.

Although the army has drawn up detailed contingency plans, it is understood to be reluctant to follow the example of the French military, which sent 10,000 troops on to the streets of Paris and elsewhere around the country after the Charlie Hebdo attack.

Plans for up to 5,100 troops to “augment armed police officers engaged in protective security duties” were revealed in documents accidentally uploaded to the National Police Chief Council’s (NPCC) website, according to a Mail on Sunday report.

The plan was contained in the minutes of a closed session of the NPCC held on 22 April in a hotel in Leicester. The minutes were then inadvertently uploaded to the council’s website.

While the Ministry of Defence has plans for backing up the police following major terrorist attacks, there is resistance to committing large numbers of troops for indefinite policing duties.

Part of the argument against is that the army, having been cut down from 102,000 to 82,000, is already overstretched and that if 5,000 troops were to be deployed to the streets, it would leave a significant hole in the number available for military duties.

There could also be a morale problem after the initial novelty of being posted to the streets begins to wear off, with the attendant boredom of guard duty day after day.

But the biggest single objection is that once troops are committed to the streets, it is hard to pull them back. It would require the security services to declare that the threat level had dropped sufficiently to allow them to return to barracks.

France initially deployed 10,000 troops, 7,000 of whom are to become a presence on the streets for the foreseeable future, the president, François Hollande, has announced. Italy, too, has deployed 5,000 troops on its streets.

David Cameron put the British army on standby after the Charlie Hebdo attack but in the end accepted the arguments against deployment. The issue has been discussed at meetings of Cobra, the government crisis group which brings ministers together with senior military and security staff.

The plan reportedly revealed in the leaked minutes is codenamed Operation Temperer and would see troops backing up the police in guarding potential targets while counter-terrorist officers and MI5 hunted for attackers.

The week after the Charlie Hebdo attack Cameron asked Britain’s counter-terrorism police to continue working with the military on contingency plans for attacks by roving armed bands, citing not just the example of Paris but the multiple attacks in 2008 in Mumbai.

When Tony Blair was prime minister, he authorised the deployment of 450 troops in 2003 to help with security at Heathrow airport and elsewhere around London.

During the Northern Ireland Troubles the army deployed 21,000 troops.